Originally from the island of Bora Bora, « the pearl of the Pacific », Teva VICTOR grew up in the middle of nature on a small islet.
Born of an explorer father and a stewardess mother, traveling, and all the open-mindedness that goes with it, have rocked his childhood. 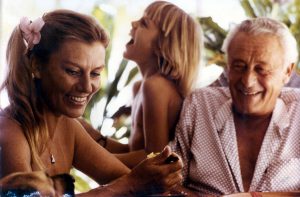 At the age of 18, on his « motu », he takes in hand his first wood chisel and mallet, and will not stop sculpting thereafter.

Self-taught, he likes to work in nature: on living or rooted trees.
In 2001 he begins working on volcanic stone.
He sculpts « in situ » on rocks in the middle of the bush or in rip rap.
Even if working with Basalt is much more difficult and physical than working with wood, Teva is immediately subjugated by this eternal and powerful side stone brings. 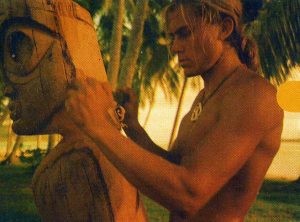 The nature he respects so much to have grown up with her, is such as stone: timeless; and will survive our ephemeral human passage.

Teva VICTOR works with collectors and art lovers, and his works, mostly large ones, have already crossed the oceans to find themselves in their new homes around the globe. 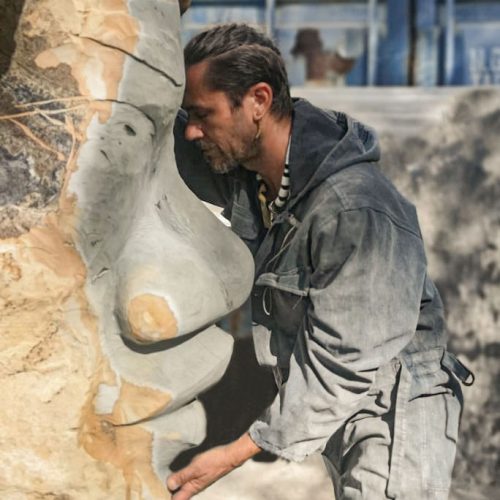 Each of his art piece brings elements of thought on many levels.

The faces that are drawn from the stone make us think about emotions we feel. The Yin and the Yang of course with its equilibrium in all things; but also, the more general message of the complexity of who we are.

Beyond all of this, the artist never forgets the original stone as found which has allowed the art piece to exist.  Thus, as he says: « nothing can equal the beauty of nature, we are here only to bring a wink of our passage on earth. »
And so, like a praise to nature, the artist teamed up with each stone, so that together, could result something that us humans can have more ease to appreciate.  Thus, we can also better understand the process of the sculpture: from the origin to the final face.

Each stone has its own character:  its color and motifs, encrusted crystals or speckles,  the expression of the face.
It is all these facets that draws us to discover each time something different.

"Art exists at the minute where the artist takes a distance from nature », says Jean Cocteau. And yet, the Art pieces of Teva Victor really seem to be a powerful surge to come back to this nature, sensing it, making it visible. The spirit of the sculptor seems to penetrate the bare nature of the rock and sensing the soul that animates it. From his childhood, on a little island in the lagoon of Bora Bora, Teva Victor inherited this profound respect for the environment. And thus, for the sculptor, the idea is to make the face that already exists in its heart, appear. For this, he fuses with it and generally only puts visible just one piece of the face. The original rough part of the rock always has its place in the art pieces of Teva VICTOR, like if to signify the immutable greatness of nature and, at the same time, the humility of the artist that only sees in his work a sign of the human passage, ephemeral and full of respect. The art piece perceives thus like the answer from a subtil dialogue between the man and the Universe. These expressive faces, with their changing textures, give the sensation that the rock is inhabited: animism isn't far. But they also appear like a miror for he who looks at them and who can see the reflexion of the complexity of the human being. Multifaceted faces, where the smooth plays with the rough in order to create an impalpable essence, Teva VICTOR is indeed talking about us. And the need to touch them that arouses seem like an invitation to reestablish that link with the other and nature.

Commissioned by an art collector, this piece is going to ship to a Manor in West Sussex, UK.

a touch of Polynesian tradition, revisited by modern lines that cut the untouched natural texture of the original stone.  Curves of silex-style broken river bed passing from one side to the other through a beach of the mind.

who are we really, but a multitude of different facets of ourselves…

Currently in a restaurant in Bora Bora

Order of a Polynesian « Mariane » for the Town Hall of Mataiea.

On this beautiful phonolite stone from Raiatea island, the sculptor Teva VICTOR partnered with the rock and followed its lines and pursued his inspiration toward new forms and movement.

Wishing to ally the traditional Marquesan anthropomorphic Tiki (characterized by its eyes, ears, and corner of the mouth), with the human realism of its lips and nose: creating a fusion of two worlds, thus awakening an unconscious familiarity.

In this vision, adding diagonal and circular lines allows to emphasize certain aspects that can be found on the traditional Tiki, and at the same time proposes new rhythmic : The elliptic lines symbolizing a cyclical creative energy of transformation, expressing movement and constant change. Just like a walking person who evolves, this movement expresses the adaptation necessary to survive the surrounding world in constant change.

A line of life, of journey on this earth, marked out by levels, stages, experiences, which lead us to grow, to broaden our understanding of things, to broaden our perception of things, to communicate better, to better open the eyes and the senses on Life, with gratitude and open-mindedness …

Is it an Egyptian reference, like a totem from an ancient forgotten terrestrial or extraterrestrial civilization? A reverence towards something greater, higher, calming, Universal, which is, in fact, inside each of us …

A line of life, of journey on this earth, marked out by levels, stages, experiences, which lead us to grow, to broaden our understanding of things, to broaden our perception of things, to communicate better, to better open the eyes and the senses on Life, with gratitude and open-mindedness …

Is it an Egyptian reference, like a totem from an ancient forgotten terrestrial or extraterrestrial civilization? A reverence towards something greater, higher, calming, Universal, which is, in fact, inside each of us …

Mixing diffenrent styles in this unique piece creating surprise as we change angles.   The lines caressing and undulating are violently cut, leaving place for a new perception.
The artist here mixed classical to abstract, leaving his iconic signature untouched: the lips.

Piece now in a Manor in West Sussex, UK

« Ruahätu » god of the oceans.
This is an art commission by the Ministry of Culture of Tahiti island.
The artist tempted to recreate an ancient Ti’i from memorable times.
Elements from the face or the body are just barely visible, giving an impression that it has been worn by time.  A symbolic sea urchin leads to understand that this is an artistic representation of the Ruahätu god.

Piece in a restaurant in Bora Bora

Currently on a motu in Bora Bora

Pierre à Graie from the south of France